Impressions from participation in the conference # Config2021 organized by Figma.

Few days ago, April 21-22nd, the #Config2021 conference by Figma had place. A virtual event where Figma users come together to learn from each other. Here are some thoughts right after the confrence Config2021. I’ve listed all the talks that I was attending with my takeaways on them.

Right in the beginning, Dylan Field, (CEO of Figma) started with what’s new on the Figmaverse (I made up this word right now). There were several big announcements:

FigJam is an online whiteboard for team collaboration and I’m excited for this for several reasons:

The journey to interactive components

For example, there were situations where I needed several radio buttons in one place. Anyone who tried to make radio buttons work in a prototype knows that it was a lot of work.

This simple example is just the tip of the iceberg of how complex checkboxes need several views to prototype it well.

Now everything is changed with interactive components, because from now on it’s possible to make connections to different component variants inside them! 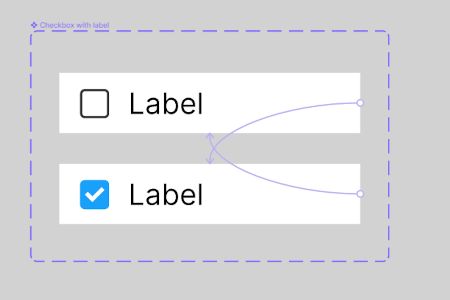 After the talk, I’ve registered for closed beta and I encourage you to do the same (link for registration form: https://docs.google.com/forms/d/e/1FAIpQLSctELo9clvK0uP-0zDAxMqrgtCNyK0OB2hff6O7SnK9y4jo5g/viewform)

Pushing Figma to its limits

This presentation went above my wildest expectations. It was stacked with tips & tricks from four different people that have approx. 5min for each presentation.

Here are some hacks that I was able to capture:

Everything was presented at a fast pace so it was hard to capture everything, I will be waiting when this talk will be published on youtube to deep dive into these hacks in the future.

Everything is not fine (and that’s okay)

The last Wednesday talk I was attending was about mental health. This topic is really important for me because I’m trying to be more aware of burnout symptoms.

Nannearl Brown, speaker of this talk were making great points and I was able to write down some quotes:

Those words made an impact on me and inspired me to think about this more often than I usually do. So here it is, my takeaways on first day of the #config2021 conference by Figma and for those who are yet interested there is more to know from the next day.

Confessions of a flawed designer

Pablo was sharing a story that at the beginning of his design journey he had a hard time describing what he’s really doing as a job. At first, he was defending his work and taking feedback seriously because he thought it was competition. He thought that approval from stakeholders in the meeting room was more important than resolving real user problems.

He later understood that giving to the community and sharing his knowledge with people is the key to overcome his ego.

This talk reminded me of two things:

So the talk started about the type of developer that feels disempowered. Design is his source of truth and all he can do is to make it look just like in the mocks.

But there are some ways to pull developers into the design process so they have an impact on the product.

It turns out that low fidelity concepts and designs are really good at getting people to design without realizing that they’re designing. They can see that you’re early in the process so they are more likely to give feedback because it’s clear that the low fidelity concept is ready to be changed.

The one thing that designers can do to check if feedback from others is genuine is to present good and not-so-good ideas. This way other people (like developers) can acknowledge that even they are able to give feedback that is helpful.

This talk was a mix between presentation and working with files. In the beginning, Angela and Santiago were talking about some of the most common problems that can occur while creating and managing a design system: naming convention, no rules, external libraries, project scope, no personality of sticker sheets.

The second part of the talk was in the Figma file where the sticker sheet and design system was presented.

My thoughts on this talk:

Also, it was nice to look at the more complex design systems that I’m using every day, I duplicated some pages to look at them closed later.

Conclusions from the conference

In this way, the #config2021 conference by Figma came to a close. Those two days were great, I learned a lot from talks that I participated in. I can’t wait for the next conferences/meetups that I will be part of and  genuinely recommend taking part to anyone looking to grow as a Designer.

Intranet features you simply must have in 2021

The article was written in cooperation with Maja Biernacka - the author of "Behind the IC Scenes" blog and Internal Communication expert.

In our daily work, we help to develop our clients' businesses. Their trust and effective cooperation make us grow as well. January, 2022, the new edition of Forbes Diamond Award report was published. We are proud to be listed among the fastest-growing Polish enterprises in this prestigious report.