Generation "Z". How to prepare the E-commerce for the next generation of customers?

Characteristics and analysis of behaviour and interests of the "Z" generation. How to win their hearts and turn them into loyal customers?

The basis for efficient trade on the Internet is the process of customization of marketing activities to the customer's needs. The way of selling online and generally understood term of advertising most importantly reach the desired recipients. They must be properly steered towards purchase of a product or service.

When we speak of e-commerce, it should be noted that the largest group of buyers nowadays is definitely the young generation, the so-called "Z generation". They are not only constantly present on the Internet, but they are also the people who base on it in performing most of their activities - both social and shopping.

You are probably wondering what are the characteristics of this social group and who belongs to it? How to tailor e-commerce activities to their needs and preferences? Here is the answer!

Who belongs to the Generation Z?
Sociological viewpoint

At the beginning, it is worth taking a look at the people who actually belong to this specific group. Most often, they are thought to be the people born between 1995 and 2010. However, our analysis is based on the report of GWI, which used a narrowed age range of respondents. There were used information on persons born between 1997 and 2005. As a result, the possible error margin was reduced. The data for the study was collected from 2014 to 2021. Such an extensive resulted in possibility to draw concrete conclusions on characteristics of this young social group.

According to the report, most of the representatives of "Z" generation are still single. Marriage is nowadays rather a rare case. However, it is worth noting that the oldest of the are currently 25 years old.

Moreover, a significant decrease in the percentage of university students can be seen as the years went by. On the other hand, despite the relatively young age, the working part of the group is constantly growing. Most often, they find work in enterprises or change their career path to self-employment.

Interests and preferences of the generation “Z” - how to draw their attention?

With the knowledge of who belongs to this specific group and being aware of their education level or marital status, one should analyse their statistical preferences. They are crucial when planning marketing activities.

First of all, the "Z" generation pays much more attention to the issues of ecology and takes care of the climate and the environment. Studies show that young people identify climate change as a more serious problem than racism (ratio 44% to 43%).

They love to travel and want to be able to observe the unspoiled beauty of the world. Among other things, which is why the good of nature is so important for them.

Globalization in the case of the "Z" generation has had a very strong impact on their perception of the world. Because of the fact that they were raised with access to the Internet, they had the opportunity to learn and obtain information from the farthest corners of the world. As many as 55% of them have been interested in discovering it. That is why they are so curious; they want to communicate with people from different countries and cultures (49% of respondents).

It is worth emphasizing the importance of participation in the global network – the Internet – in their lives. Social Media (for instance Tik-Tok) are for them a basis of communication, and sometimes also the source of information. Even the television is now available online. It is mainly about streaming portals, which 97% of respondents admitted having been using. Knowledge of various options offered by such services is even an element of the current pop culture. The same principle also applies to computer and mobile games. Their popularity is constantly growing, and the editions have a significant impact on the emerging trends.

E-commerce for "Generation Z"
marketing for the new generation 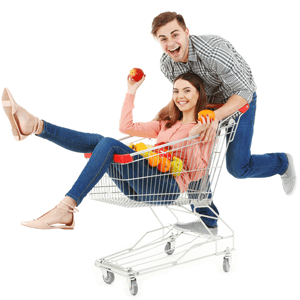 As we know who the target group is, we can move on to planning the marketing activities that will effectively affect the young generation. It is the generation that currently dominates the market. Those people influence the values that the next generations will have, and the understanding of them is the “key” to the future of marketing. To start with, it is worth paying attention to the interests of "Zoomers" and try to translate them into sales.

Brand features. How to attract "Zoomers"?

It can be said that the characteristics of the brand offering a given assortment are crucial. According to the statistics, the representatives of the Generation Z most often want products or services that are "Smart" (47% of the respondents). As it can be seen the intuitive functioning and modern solutions are values that for the young generation are extremely important. According to the report, the brand must also be:

Therefore, it is worth taking these features into account when planning how the products or services should look like. Such values must also be presented by the marketing, also in content published online.

Values of the message determine the sales process

The above-mentioned features should be characteristics of a given brand if it wants to be successful within the young generation. However, it is worth considering the actions that the company should undertake to create a group of loyal customers.

According to the research, as many as 37% of the respondents agreed that the most important factor when shopping online is to feel valued. A brand that, thanks to its marketing message, will make potential consumers feel unique, is going to sell more.

The importance of this action is indicated by other answers of the respondents. It was also important to personalize the assortment - this factor is second in the ranking. “What action should the brand undertake?” they asked, and 30% of the respondents chose this answer as an important aspect of sales.

According to the data, as many as 61% of the young people buy clothes marked as "Eco." What may be found interesting - they even declare the willingness to pay more for such products.

Does the form of the message determine the success of the e-store?

Of course, also initial is the form and location of an advertisement on the Internet. According to the research, Generation Z is more likely to shop with the use of Social Media. According to the data, 50% of the generation "Z" looks for products via social networking services. Moreover, 13% of the respondents said that they would be more willing to buy products from brands that publish interesting content on social media.

At the same time, it is worth taking a look at the portals that are currently the most popular. According to the research made in the third quarter of 2021, 46% of people from the young generation are looking for information about a given brand within the Tik-Tok app. However, 69% does it with the use of Instagram.

So how should such a content look like? First of all, it is currently based on the so-called Memes. "Zoomers" are more likely to use the products and services of brands that publish this form of content every month. As much as 54% of the respondents agrees with this statement.

What content should be published in the e-commerce with the view to the generation "Z"?

What else should the posts contain to attract the young audience? 63% of the respondents said that learning new skills is to them important. Every post of webinar containing interesting information is surely a good direction in the process of attracting the audience within the "Zoomers".

It is also worth remembering that 57% of this generation described themselves as people with "an open mind". Therefore, it is important to be aware of the fact that the content published by a given brand does not offend other people's views or interfere with someone's beliefs. The neutrality is initial.

Of course, there are exceptions. Recent geopolitical developments have proven that, in some cases, it is worth adopting a specific position. Many brands that have now opted for this step have received a positive impact from their consumers, especially those from those of the "Z" generation. According to the report, 46% of them want to know what is happening in the world and intend to obtain this knowledge from social media.

Functionality and construction of the e-store

It is also important to focus on the functionality of online stores. It will certainly be a good idea to implement the new payment method "buy now - pay later." It is mainly because of the fact that, as it was emphasised in the report, a significant part of the "Zoomers" due to their young age, do not have significant savings.

25% of people from the "Z" generation responded that, when shopping, they pay attention to the number of likes and comments concerning a given brand or specific products. They treat them as real opinions about products and services. This is more important to them than the possibility of payment on delivery (according to 21% of the respondents).

Make an appointment for a free consultation
so we can analyze your needs and match them
with the most effective solutions.

How to gain the customer loyalty within the "Z" generation?

According to the statistics, it is quite simple. If, after completing all the above-mentioned steps, someone decides to buy from your company, there is a chance that they will buy there more often. The main purchasing factor is whether the people like a given brand. And this idea is supported by 37% of the respondents. The second position, with a score of 24% is occupied by, ex aequo:

These statistics clearly show how important it is to build a relationship with consumers. They also mainly determine the shopping choices of the "Zoomers". People who were born between 1997 and 2005 do not buy by accident, they verify individual companies thoroughly. They are mostly guided by online opinions and the fact of how the image of a brand in the online world.

Therefore, every element of the marketing game is initial, as the described statistics show. It is worth adjusting the e-commerce activities to the young generation, also due to the fact that it affects the process of forming of the upcoming generations - the future consumers.

The automation seems to be always the best solution these days. However, the manual one often work well in areas where automation tests are not applicable. Read the article to see differences.

Google is direct with the statement about connecting the website's position in the search engine with its User Experience. The assumption is simple - the search results are to promote websites which present user-friendly and valuable features.